Day 3, part II: Can a person be illegal?

Paloma Fevieres from the Spanish Commission for Refugees (CEAR) gave insight to the situation of asylum seekers in Spain. The NGO she works for provides legal and practical support for people, who managed to reach Spanish borders. She described the procedure as bureaucratic and often discouraging for the applicants. There is only a very small percentage being successful in their application for asylum. The procedure of obtaining exile takes at least half a year and is composed of several interrogations starting right at the border, life in a refugee center and the crucial necessity to prove the need of protection in front of court. Behind this formal procedure there is a whole emotional story about very dramatic events and traumatic experiences.

We heard the personal “exile” story Marisol from Columbia.  She was working as a legal adviser in a family company, operating in several cities in Columbia. After the owners of the company were kidnapped by the guerrilla organization FARC she and her colleagues continued their work, while being black-mailed and forced to pay protection money to the guerrilla. When she saw that even the government could not offer her protection she decided to seek for safety in Spain by obtaining a student visa. The visa expired, so she applied for asylum, which she didn’t want to do before since she was scared that revealing information could harm her former colleagues. Her application was not successful, which predicted her to stay in Spain illegally and further fight for legal status.

“I am impressed of Marisol’s strength to pass over so many shocking events and to continue her life in a strange, far away country, far from her family. If I were her I think I would be too traumatized and I wouldn’t have dared to leave all behind like she did.” commented Alina from Romania shortly after the interview.

“I was so impressed when she started crying. I could then understand how hard the procedure had been for her and how much she misses her country” shared Marta after the emotional story told by Marisol

Carsten from Germany said: “Mariesol’s story made me realize the luxury of having a stable democratic system in Germany,  including freedom of speech and security granted by governing laws and rights which I actually considered unconsciously as being a given.” 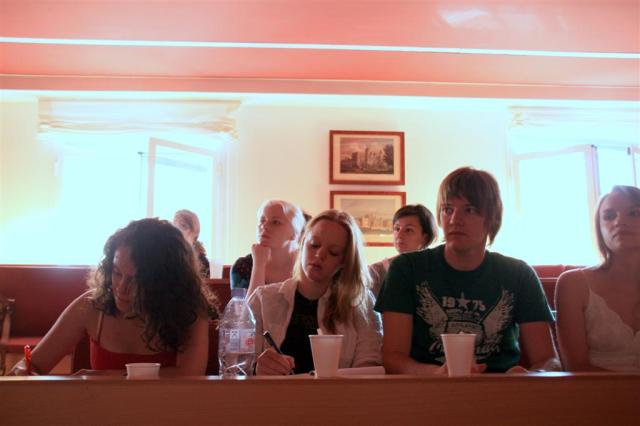 This entry was posted in Alumni activities, Study trip Madrid 2011. Bookmark the permalink.