Delayed Day 1: Message from a Spaniard in Berlin…

For the first day Jorge from Spain was supposed to be our Blogger, yesterday it was impossible to write anything, so here it comes now. Jorge:

I have to apologize because yesterday it was impossible to write anything on the blog. We were completely exhausted!

After many days waking up very late, it’s not easy to get up at 7 o’clock in order to start with the work, but finally it wasn’t so bad! Thanks to “European Tina Games” (ETG) we knew better each other and some of our customs, so then, we were prepared to begin with the scheduled activities.

We were working very hard on our posters at home so, on the morning, after Frank explanations of the program (little difficult for him because of the church’s bells) everybody showed it and explained what our entry was about. All of them were very artistic, but what most impressed me were the different topic we had chosen and the entries’ “high quality”, all of them with a very good work of documentation, investigation, interviews, photos and many other unusual resources. It was very funny because we went out of the hotel, and sitting on the grass we tried to explain as well as possible our entry.

On the afternoon we went on a city tour in order to have a first contact with Berlin. Now we could “survive” on it if it was necessary (I don’t hope so!). For the moment I’m trying to adapt to different customs because the absence of the well-known Spanish “siesta” has terrible consequences.

On the evening, we worked with some disturbing photos of war prisoners. We “designed” many creative collages with them trying to explain our ideas and feelings about POWs treatment in camps. We notice the bad conditions of them, and how Geneva Conventions were not respected.

During these days we’ll work on it, trying to have a different and well founded idea about neclected victims of IIWW: war prisoners.

Our adventure ends here for today. Tomorrow will  be another day with many new things to do, so I’m going to sleep because I’m so tired that I’m going to fall asleep on the computer. 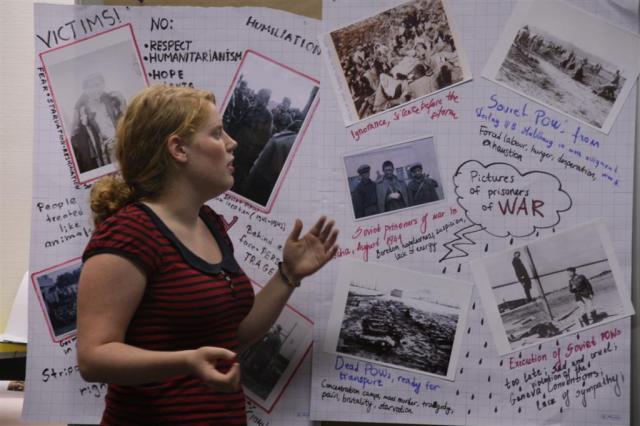 This entry was posted in Academy report, YA Berlin 2011. Bookmark the permalink.